Behave When You Are Investing

One of the more interesting topics in the finance world recently has been behavioural finance. Put simply, this is about making sure clients don’t make stupid decisions when investing. The key is that investor confidence is influenced by how their investment is performing. When it’s going well, we want more; when it’s not going so well, quite often we want out.

Our job as financial planners and investment coaches is to stop those emotions, positive or negative, being reflected in decisions that may well turn out to be very unwise.

When we meet potential new clients, one thing that resonates is the difference between what financial planners look for and what clients want to know.

We are focussed on the big picture: helping clients do what they want, when they want.

But so often, all a client wants is to make money, and make it quickly. Or save tax…!

Don’t get me wrong, we like that too, but I’d rather hear why you want to do that, rather than explain how.

Some of the things we always get asked is “When my money is up 10%, why don’t we just sell?” Or “Why would I invest in these countries I don’t know anything about? Stick to US, UK and Germany and we’ll be OK.” My personal favourite is, “This investment is boring. Can’t we do something a bit more fun with the money?”

We have all watched the films and TV shows where someone buys a stock, holds it for a day, and sells making 20% in the process. We’ve also watched the films which end in disaster, namely “The Big Short” which is about the 2008 recession – which by the way is 10 years ago now! It tells us the story of an exciting investment – Collateralised Debt Obligations! Look how that ended up.

Client’s sometimes struggle to see why we invest in such a large portfolio. “Sure, you get all the good stuff, but why invest in the stuff that isn’t so good as well?” The issue is deciding which is good, and which is bad.

The media is all about stock picking. Every Sunday paper lists the top 10 performing stocks and the top 10 worst stocks. Do an internet search for investments, search under the “News” tab, and you are guaranteed to get something similar.

Our investment portfolio is invested all around the world, in everything from fixed income, shares and property. If you drill down, there are over 10,000+ individual investments. But why?

Knowing which country is going to do well from year to year is difficult. I can’t tell the future. If I could, I’d have won the lottery a few times, be sitting on a beach somewhere and wouldn’t be writing this.

This shows each country’s annualised return in the calendar year, for the last 20 years (not including 2017). Each country is given a different colour, and the key to this is that no country outperforms the others consistently. Look at the last 2 years, 2016 and 2015. The best country performance in 2016 was Canada. Look where it was the previous year – the very bottom.

A UK Home Biased Portfolio – A good idea with BREXIT around the corner?

With those who try to build investment portfolios themselves, quite often we find that it is very heavily invested in UK markets. Even old pensions in insurance companies can be quite heavy in the UK.  In the picture above, the UK is the light blue which more often than not is in the middle – so that’s not too bad. Another enlightening fact is the countries that make up the global market, as below. 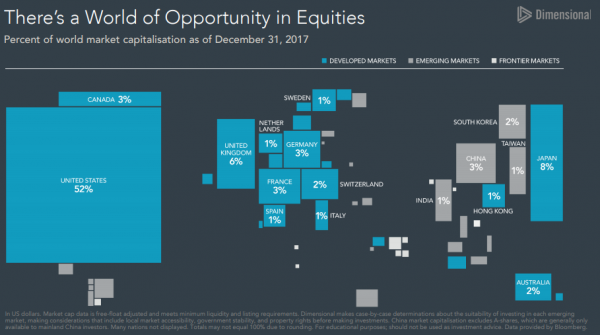 This is a map of the world by market capitalisation of each country. That means that this shows how much of the global shares market each country makes up. The bigger the square/rectangle of the country, the larger proportion it makes up in the share markets.

So, for example, the US makes up 52% of the world of equities. Perhaps surprisingly, Japan makes up 8% and the UK makes up a total of 6% of the shares (equities) in the world. Even more interesting, the European superpowers, Germany and France each only make up 3%. So if you are heavily invested in the UK market, you have an awful lot of your money in a tiny part of the world financial market. Do you want to put your money on the risk that the UK market is going to be the one that outperforms everywhere else after Brexit??

Investing in a Large Portfolio

So picking individual investments isn’t going to be easy. Chances are, whoever picks it is going to be wrong a lot of the time.

The Dimensional research shows that if you were invested in the global market of equities between 1994 – 2017, you made an annualised return of 8%. During that time, however, if you hadn’t managed to pick the top 25% performing stocks, your annualised return would have been an annual loss of 4.4%.

Also, remember what happened during this time!

In 2000-2001 we had the “tech bubble” bursting, the “Millennium Bug”, 9/11 and the Afghanistan war began. From 2003, we took on Iraq. In 2008, we had the biggest market crash and recession in most of our lifetimes. And even with all of that, being invested in the whole market made an annualised return of 8% per annum. Sure, some of it was tough, but if you stuck it out, you were definitely rewarded.

It’s for this reason we talk about diversification; trusting the system; Behavioural Finance. About not pulling your money out if markets go down. With Brexit around the corner, who knows what’s going to happen. But if you stick with the system, you should be rewarded – but we can’t guarantee this won’t take time.

REMEMBER: The value of investments is not guaranteed and can go down as well as up and you may get back less than you have paid in